Looking Back at Some Criminal Captures in 2020 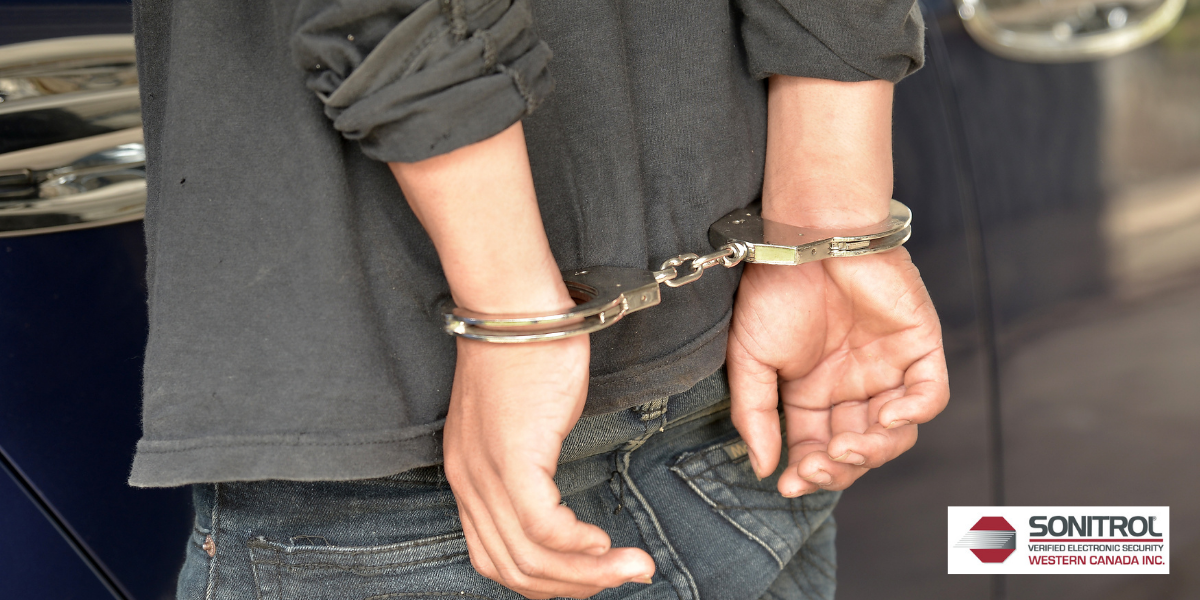 Did you know that Sonitrol Security Systems lead the industry in criminal captures? Over 182,000 recorded arrests have been made since 1977, in locations across North America using Sonitrol alarms!

I thought I’d share a few criminal capture testimonials that we received over the course of this year. We post these on a regular basis on our website to share the feedback which often includes video or audio clips of the actual incidents.

Tire Thief Caught Red-Handed at Tire Storage Compound - Video Clip!
We installed your Sonavision Live Monitored Video back in 2016 after experiencing 2 major B&E's that went undetected. Until now, your sign on our fence has been a great deterrent.

Friday night's B&E shows that your system works great and that the RCMP respond amazingly fast when they know a B&E is real.

Your Verified audio listening system detected the movement of these thieves as they picked their way through one of our large receiving doors. You dispatched the Calgary Police immediately, and moments later they had all 3 culprits in custody!

I am writing to thank the Delta Police Department and your Sonitrol monitoring staff for their great work in catching the thief who broke into our Ladner Head Office site just after 3:00 AM this morning!

Moments later, the Police were on-site and took care of this situation. We had no damage and no losses were incurred. Thank you to the Victoria Police, their 911 operators and your Sonitrol monitoring staff for their terrific work!

Your monitoring staff detected audio of movement and banging at one of our doors and dispatched the RCMP right away. The responding officers and K9 unit arrived in moments and caught this thief red-handed!

Just after 9:00 PM last night, a thief broke into my storage yard and began digging through my bins. I have a verified video system from Sonitrol, and with them working with your 911 operators, officers were immediately dispatched to my business. This thief was arrested moments later with no loss to me.

It's great to see the coordination of Sonitrol, the 911 operators, and the responding officers to have positive results.

Your monitoring team detected these thieves within our yard and stayed on the line with the 911 Operators for the few minutes the responding officers were on the way; leading to the apprehension of both. I live nearby and was able to get to the site quick enough to see the RCMP in action.

The RCMP have always responded very quickly to our alarms because they know that our break-in is "real" and truly want to catch these guys! The fact that your monitoring staff stay on the line with 911 and help direct the RCMP to where these thieves are is a testament to the system we have and your relationship with the Police.

The RCMP advised that this individual already had warrants out for his arrest; so catching him and getting him off the streets will make Port Kells a more secure environment for all.

Thieves Apprehended at Warehousing / Distribution Compound in Canada Thanks to Sonitrol

We are thrilled to be able to thank the RCMP again and would recommend your system to anyone who is serious about protecting their assets.

We had a breach in June of 2012 and again this morning at 2:20 AM. In 2012, a single thief was arrested; last night the RCMP arrested 3 people in our yard before they could get away with anything!

To learn more about implementing a Sonitrol verified security system for your business - get in touch with us today. We’d be happy to discuss your business requirements and recommend an affordable solution.